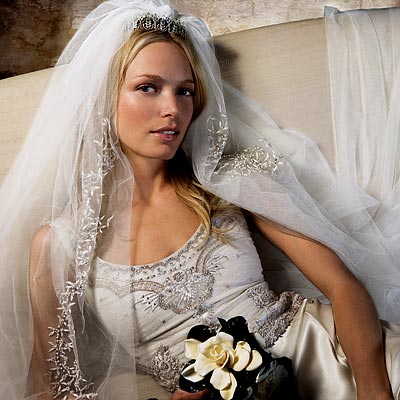 Contact us now for a fitting for your beautiful new wedding dress.
The wedding veil; beautiful, alluring, and perhaps the most emblematic piece of bridal apparel that we associate with the ‘traditional’ bride. There are many theories regarding the origin of wedding veils and how they established their popularity in wedding ceremonies right down to our modern times. What we do know is that wedding dresses all need a nice wedding veil to accompany them
The bridal veil is a custom with roots in various cultures and is often associated with the belief that a bride is vulnerable to various threats, or in need of protection from a range of superstitions that emerged surrounding weddings in general.
For example, Romans bride of ancient times would wear a flame-colored veil thought to scare off vindictive spirits who might bother the wife-to-be. Interestingly, the Roman word used to denote a woman marrying is ‘nubo’ which is related to the word ‘nubes’ or cloud, and can literally be translated ‘I veil myself’.
Later, Roman law stipulated that there be five female witnesses in attendance at any wedding. These attendees, or bride’s maids, were to be veiled and dressed in the same manner as the bride. The idea of this was to confuse any would-be kidnappers or rival suitors and to protect the bride’s identity from evil spirits desiring to sabotage the happy day. This tradition of the bridesmaids wearing veils continued right down until Victorian times.
In cultures in which arranged marriage is customary, dark veils were worn to completely obscure the bride’s face. The veil would protect her identity from the groom until the marriage vows had been completed. This was mainly to ensure the union was legalized without giving the groom opportunity to reject the bride based on dissatisfaction with her appearance. In a number of religions, the bridal veil was worn as a symbol of humility and respect before God during the wedding ceremony. This ‘reverence’ in time evolved to being a status symbol for the bride and her family. By Victorian times, the quality, the length and even the weight of the veil was directly indicative of her social status. if you are planning your weeding in cultural and religious theme, there are some wedding ideas that you will be interested in.
Ancient Mesopotamian and Persian tradition required a new husband to cover his betrothed with a veil so as to publicly declare that she was now his wife. To be adorned with a veil was considered a privilege, so much so that the law of the time clearly defined which women could be veiled, and who were forbidden to be.
The Babylonian Code of Hammurabi in ca. 1790 B.C. for example, stated that only upper class, free women were entitled to wear a veil once married whereas slaves, prostitutes or low-class women were actually forbidden to have their identity obscured in this way.
In modern times, the veil has commonly lost its superstitious affiliations and is instead embraced for its widely recognized association with feminine wedding wear. It is often thought to ‘top off’ or ‘complete’ the brides outfit… that perfect addition of something so exclusively bridal.
Tastefully selected to enhance the wedding dress, a veil might add that whimsical fairytale element to wedding photos. Whether elaborate or simple, the wedding veil can without question, enhance the dramatic impact of Bridal couture. And like many other exclusively bridal traditions, it can help differentiate the wedding day as one that is special and unique above all other days… a delicate icon of a day to be remembered.
Check out more wedding articles here.


This site is protected by reCAPTCHA and the GooglePrivacy Policy andTerms of Service apply.

ENQUIRE ABOUT THIS PRODUCT Stay in the know
Sign up and get the latest on special events, new products, and exclusive promotions.

Our bride store has moved to 26 Mccoll Street, Newmarket. Come see us there!

Got it
X
Manage Cookie Consent
We use cookies to optimize our website and our service.
Manage options Manage third parties Manage vendors Read more about these purposes
View preferences
{title} {title} {title}
Shopping cart
There are no products in the cart!
Continue shopping